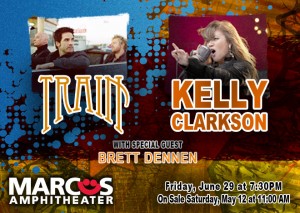 Kelly Clarkson and Train are headed to the Milwaukee Summerfest to set the ambiance on fire. One Friday the 29th of June 2012 the Grammy Award winner and American rock super sensation, Train along with the two times Grammy Award winner and country music’s sweetheart, Kelly Clarkson are scheduled to add some sugar and spice to the Summerfest. This is one performance that should not be missed at any cost as you can witness the two icons in action, dishing out one hit after the other.  Get ready to groove to “Mr. Know it All” and “Drops of Jupiter” at the Marcus Amphitheatre.