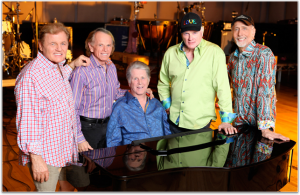 The Marcus Amphitheater is proud to present the iconic pop and rock music group, The Beach Boys as part of this years Milwaukee Summerfest! Formed in Hawthorne, California, United States in 1961, they are widely considered to be one of the most influential bands in rock and pop music history.

Tickets are definitely going fast on this one, so don’t miss out.