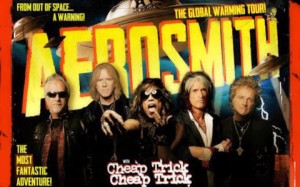 The Bad Boys from Boston will change the Milwaukee music scene during their liver performance at the Summer fest this year. Official christened as Aerosmith, the bad boys from Boston are all set to perform live along with the all American rock band Cheap Trick on the 7th of July 2012 at the popular Marcus Amphitheatre. This is one rock filled night that will not be easily forgotten as these two legendary rock bands are known for their nail biting performance and thrilling music and tempo. Get ready to jam with the likes of Joe Perry, Tom Hamilton, Steve Tyler, Joey Kramer, Brad Whitford, Robin Zander, Rick Nielson, Tom Petersson and Bun Carlos.